provides a physical interpretation of the 26 dimensions of StringTheory.

Although the 8 SpaceTime and Internal Symmetry Space dimensionscan be thought of as, at least approximately at scales much largerthan the Planck length, being continuous,

the 16 = 8+8 fermion particles and antiparticles are clearly 16 =8+8 discrete things, and their representation as such requiresdiscretization of the corresponding 16 dimensions of 26-dimensionalString Theory, which is accomplished by Orbifolding. The purpose ofthis paper is to describe the geometry of such Orbifolding.

Begin by looking at the root vectorstructure of E6:

the 6-dimensional polytope formed by the root vectors of the Liealgebra E6 has 72 vertices. A 2-dimensional projection, by PeterMcMullen,

has 72 vertices in sets of 12 on 4 concentric circles, 2 of which(white centers) are double (one vertex behind another). The6-dimensional 72-vertex Root Vector Diagram of E6 can beconstructed from the 4-dimensional 24-vertex 24-cell Root VectorDiagram of D4 by adding to it the following:

This construction is the first three stages of the 5-stageconstruction of the E8 Root Vector Diagram, 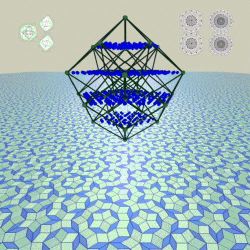 that is, proceeding from the left in the above image, the D424-cell, the two D5 hyperoctahedra cross polytopes, and the 5-dimhypercube.

The 32 vertices of the 5-dim hypercube correspond to the 16complex (32 real) dimensions of the symmetricspace E6 / D5xU(1), corresponding to a bounded complex domainwhose Shilov boundary is an 8complex (16 real) dimensional non-tube-type domain.

Divide the 32 vertices into two sets of 16

each of which corresponds to a 16-vertex 4-dimensional hypercube,whose vertices have graded structure 1, 4, 6, 4, 1.

and notice that it is made up of two 3-dimensional cubes (oneshown with circle vertices, the other shown with square vertices.

A geometrical picture of the Orbifolded 8-dimensional fermionicfirst-generation particle representation space as 8 of the 26dimensions of String Theory comes from looking at the organizationof the 16 vertices of the 4-dimensional +hypercube. Each of itstwo 8-vertex 3-dimensional cubes can be seen as two 3-dimensionaloctahedron cross-polytopes

or also as one 4-dimensional hyperoctahedroncross-polytope

or also as one 16-vertex 8-dimensional hyperoctahedroncross-polytope.

The geometry related to the other 16 vertices of the5-dimensional 32-vertex hypercube, the 4-dimensional -hypercube, andthe first-generation fermion antiparticles, is similar.

each + vertex (say, +i) is the singularity representative ofthe segment [0,+i]

which is consistent with the fact that