Now (March 2008) the world has $14trillion USA, $7 trillion of which are Mortgage-related. 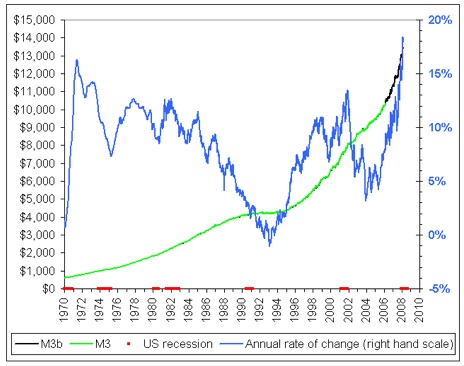 According to a 13 March 2008 article by Damian Reece onTelegraph.co.uk:

"… The Fed, with its latest $200bn [billion] offer of cheap cash, has provided yet more state aid for errant hedge funds and another Washington-backed bail-out for Wall Street bankers … The Fed has saved the day again, but it will only be for a day or so…

We have not seen anything like it since the decade of the Great Depression. …

How much further can the central banks go to support a system that is so obviously broken? …".

According to a 14 March 2008 article by Ambrose Evans-Pritchard onTelegraph.co.uk:

"… The market was starting to question the solvency of bodies that stand at the top of the credit pile. These agencies together wrap or insure $6 trillion of mortgages. …".

"... Since the Fed stopped publishing M3, which tracks the total supply of dollars in the economy, we can't even be sure how many dollars they are creating.

Reported inflation is around 2%, but the method for calculating inflation changed in the 1980's, largely at Mr. Greenspan's urging. Private economists using the original method find actual inflation to be over 10 per cent ...".

According to a nowandfutures.com web page:

"... We did some sleuthing and data extraction and put M3 back together [denoted M3b] from various weekly Federal Reserve reports that are still available. ... Ours tends to be more volatile and averages slightly higher than ...[the]... monthly reconstruction of M3 ...[by]... John Williams ...".

Back in 1988-1992 when Bush I was USA President, the Money Supply(USA dollars in the world) was around $4 trillion and the Rate ofChange was near zero.

In 1992 Bill Clinton was elected using the slogan "It's theEconomy, stupid", and during his terms 1992-2000 the Money Supplygrew from $4 trillion to $7 trillion.

The $3 trillion of new money in the Clinton era funded aDot-Com boom bubble that burst around 2000, when Bush II becameUSA President. As with all booms, some Dot-Com assets survived, somaybe about $1 trillion remained in the Dot-Com sector with $2trillion collapse-money seeking to flow to some other sector.

In the first term (2000-2004) of Bush II included the9/11 destruction of the Twin Towers and the beginning ofthe Iraq War, but the dominant economicforce was

the flow of money from collapsed Dot-Com assets into a MortgageBubble based on housing construction funded by banks who createdcomplex securites based on mortgages and sold them toHedge-Fundies.

The securitization process insulated the banks from risk, so thebanks could and did lend to everybody who asked for money, withoutregard to credit-worthiness.

The securitization process was so complex that the Hedge-Fundiescould and did easily hide the probability of risk from theirinvestors.

As long as the Mortgage Bubble continued to grow faster thanproblems arose, the builders, bankers, and Hedge-Fundies, and theirinsurers, were very happy sharing the Bubble Money:

During the first half (2004-2006) of the second term of Bush II,the Money Supply increased another $1 trillion to $10 trillion,

but the occupation phase of the Iraq War turned out to be muchmore difficult and expensive than Bush II had anticipated, so most ofthe new $1 trillion went to the Iraq Was instead of pumping up theMortgage Bubble.

To make the builders, bankers, Hedge-Fundies, and insurers happy,AND to fund the occupation phase of the Iraq War (like LyndonJohnson's Guns and Butter policy with respect to the 1960s VietnamWar and Great Society), Bush II saw that the Money Supply would haveto be increased greatly, and indeed from 2006 to now (March 2008) theRate of Change went from about +5 per cent to + 18 per cent and theMoney Supply went from $10 trillion to almost $14 trillion.

Bush II did not want to appear grossly inflationary, and tried toavoid doing so by

Some of it went to the Iraq War, but my guess is that no more than$1 trillion.

Another $2 trillion can be accounted for by adding another$2trillion to the Clinton $2 trillion and the Bush II first-term $2trillion puts the Mortgage Bubble size at the $6 trillion figurementioned by Ambrose Evans-Pritchard as the amount of mortgagescovered by USA agencies.

The remaining $1 trillion may have gone to parts of the MortgageBubble not covered by those USA agencies, so that:

the collapsing Mortgage Bubbleaccounts for $7 trillion, about half of the total Money Supply of $14trillion.

Of course, all the Mortgages are not bad, so some of the $8trillion Mortgage Bubble is sound, so maybe a useful guess might bethat the bad part might be about $3 trillion. If so, such a

Is there another Bubble where the lost $3 trillion couldgo ?

Could such a New Bubble actually produce somethinglong-term useful, and not lead to yet another collapse?

One of those, Nuclear Energy,is not only useful in the short term due to theeminent Depletion of Cheap Oil, but is also useful in thelong term. Using Nuclear Reactors to produce energy and hydrogenfuel and to desalt sea water would solve a lot of problems of theworld.

Manufacturing and maintaining the reactors could re-establish theUSA as a manufacturing power.

To avoid the risk of short-term capitalist greed outsourcing thejobs and factories related to Nuclear Energy, the project should be,like the Interstate Highway System, a USA Government project:

The USA Government should create a Nuclear Energy Projectand fund it with the $3 trillion that would otherwise be lost in aMortgage Bubble Collapse.

Now (March 2008) the world has $14 trillionUSA, of wihich about $7 trillion are related to mortgages,but:

leverage multiplies the amount of assets in the world,so:

how much does the total $14 trillion get increased by leveragemultiplication ?

how secure/risky are the leveraged assets ?

According to a 17 March 2008 Time web article by JanetMorrissey:

according to the International Swaps and Derivatives Association... in mid-2007 ... The CDS market exploded over the past decadeto more than $45 trillion ...

Credit default swaps are insurance-like contracts that promise tocover losses on certain securities in the event of a default ...commercial banks are among the most active in this market, with thetop 25 banks holding more than $13 trillion in credit default swaps...".

How fast did that happen?

According to a 23 March 2008 New York Times web article byGretchen Morgenson: "... The value of the insurance outstanding stoodat $43 trillion last June, according to the Bank for InternationalSettlements. Two years earlier, that amount was $10.2 trillion....".

So the leveraged growth of the CDS market has been:

Note that the CDS Credit Default Swap market DOES NOTrepresent ANY real goods whatsoever, as their market value is farabove and beyond the $7 trillion of real estate assets represented bythe underlying mortgages.

So, if unsound mortgages are to be bailed out by the Fed(really by ordinary citizens/taxpayers), the CDS holders should getthe same amount of real value that they created by their investments:NOTHING.

"... IN the week or so since the Federal Reserve Bank of NewYork pushed Bear Stearns into the arms of JPMorgan Chase, therehas been much buzz about why the deal went down precisely as it did.... it could be simple coincidence that the rescues caused billionsof dollars (or more) in credit insurance on the debt of ... BearStearns to become worthless ... Yet an effect ... is theelimination of all outstanding credit default swaps on ... BearStearns ...

Entities who wrote the insurance - and would have beenrequired to pay out if the companies defaulted - are the bigwinners. They can breathe a sigh of relief, pocket the premiumsthey earned on the insurance and live to play another day.

Investors who bought credit insurance to hedge their BearStearns ... bonds will be happy to receive new debt obligations fromthe acquirers in exchange for their stakes. They are simply outthe premiums they paid to buy the insurance.

On the other hand, the big losers here are those who bought theinsurance to speculate against the fortunes of two troubledcompanies. That's because the value of their insurance, whichincreased as the Bear and Countrywide bonds fell, has now collapsedas those bonds have risen to reflect their takeover by strongerbanks. We do not yet know who these speculators are, but hedgefund and proprietary trading desks on Wall Street are undoubtedlyamong them. ...

So consider all those swaggering hedge fund managers and WallStreet proprietary traders who recorded paper gains on their creditinsurance bets as the prices of Bear and Countrywide bonds fell.Now they must reverse those gains as a result of the rescues.If they still hold the insurance contracts, they are up a creek - andthe Fed just took away their paddles.

An interesting side note: It's likely that JPMorgan, the biggestbank in the credit default swap market, had a good deal of this kindof exposure to Bear Stearns on its books. Absorbing Bear Stearns fora mere $250 million allows JPMorgan to eliminate that risk at abargain-basement price. JPMorgan declined to comment on the sizeof its portfolio of credit default swaps. ... speculators on thelosing end of such deals don't typically volunteer that they havesuffered enormous hits in their portfolios until they are forced to -often when they're on the brink of collapse.

Do[es] the Bear Stearns ... deal... represent aregulatory template? ... Bondholders won, while stockholders andcredit insurance owners lost. Although there aren't that many bigbanks left that are financially sound enough to buy out the nextfailure, it's a pretty good bet that future rescues will look a lotlike these. ...

It's pretty clear that some major losses are floating around outthere on busted credit default swap positions. Investors in hedgefunds whose managers have boasted recently about their astute swapbets would be wise to ask whether those gains are on paper or inhand.

Hedge fund managers are paid on paper gains, after all, so thequestion is more than just rhetorical. ...".

If the Bear Stearns deal does represent a regulatorytemplate,

if the smoke-and-mirrors $45 trillion of the CDS marketdoes consequently vanish,

but also leave the USA government with thereal-money-supply $3 trillion to start a constructivereal-asset-based investment program in NuclearEnergy.

"...  After all of the write-downs at the banks inJune, July and August [2007], we were in a full-fledgedcredit crisis with C.E.O.'s of top banks running around likeheadless chickens ...

... [Now in March 2008] The Federal Reserve not only takenhas action unprecedented since the Great Depression - by lendingmoney directly to major investment banks - but also has put taxpayerson the hook for billions of dollars in questionable trades these samebankers made when the good times were rolling. ... things have gonetoo far ... The investment community has morphed into somethingbeyond banks and something beyond regulation ... the shadow bankingsystem ...

the shadow banking system ... is the private trading of complexinstruments ... In the past decade, there has been an explosion incomplex derivative instruments, such as collateralized debtobligations and credit default swaps, which were intended primarilyto transfer risk. These products are virtually hidden from investors,analysts and regulators, even though they have emerged as one of WallStreet's most outsized profit engines. They don't trade openly onpublic exchanges, and financial services firms disclose few detailsabout them. ...

analysts say ... a broader reconsideration of derivatives and theshadow banking system is also in order ... Whalen of InstitutionalRisk Analytics ... says ... "Not all innovation is good ...

If it is too complicated for most of us to understand in10 to 15 minutes, then we probably shouldn't be doing it."..."

or, in the words of Rudyard Kipling in excerpts from TheGods of the Copybook Headings: