Vacuum Stability or Triviality with Tquark-Higgs:

The chart I had been using 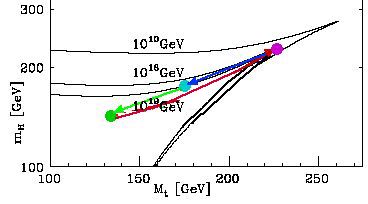 with the cyan 8-dim KK point being on the Triviality/Unitarityboundary instead of the Vacuum Stability boundary, and with

For the cyan point to be on the Vacuum Stability boundary withHiggs mass = 176-188 GeV, the Tquark mass would have to be increasedto about 190-200 GeV, which I think is physically unrealistic becauseit does not correspond to any ot the 3 peaks in the Fermilabdata. 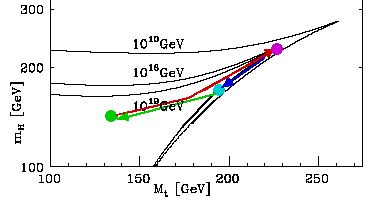 So, there are two physically realistic possibilities:

where the one loop contribution is given by

while the vacuum value is determined by the Fermi constant ...

In the ... limit of a small Higgs mass ... lambda is small and its beta function is dominated by the ...[ 4 H ]... term coming from fermion loops. This term, proportional to the fourth power of the Yukawa couplings, ... becomes dominant for a heavy top quark. Its effect is to decrease the value of lambda in the ultraviolet. Since the change is not proportional to lambda, it can in fact drive lambda to negative values beyond a certain energy. Naively, this implies a negative contribution to the potential, which destabilizes the theory: large field configurations become energetically favored, and the theory tumbles out of control. The standard model description becomes inconsistent above a certain scale. This yields the instability bound. Should the Higgs particle prove to be light, this bound means that something must happen to the standard model at that scale, perhaps in the form of new contributions to the renormalization group evolution appear[ing] ... from particles not in the standard model. ...".

where the one loop contribution is given by

while the vacuum value is determined by the Fermi constant ...

for a fixed vacuum value v, let us assume that the Higgs mass and therefore lambda is large. In that case, beta_lambda is dominated by the lambda^2 term, which drives the coupling towards its Landau pole at higher energies.

Hence the higher the Higgs mass, the higher lambda is and the close[r] the Landau pole to experimentally accessible regions. This means that for a given (large) Higgs mass, we expect the standard model to enter a strong coupling regime at relatively low energies, losing in the process our ability to calculate. This does not necessarily mean that the theory is incomplete, only that we can no longer handle it ... it is natural to think that this effect is caused by new strong interactions, and that the Higgs actually is a composite ...

The resulting bound on lambda is sometimes called the triviality bound.

The reason for this unfortunate name (the theory is anything but trivial) stems from lattice studies where the coupling is assumed to be finite everywhere; in that case the coupling is driven to zero, yielding in fact a trivial theory. In the standard model lambda is certainly not zero. ...".

Which is realistic - Vacuum Stability or Triviality?

My personal present-day guess is Triviality, because:

So, in my present opinion (Dec 2006) this is the physicallyrealistic way the 3 peaks of Fermilab Tquark event data fall on theHiggs mass - Tquark mass chart: 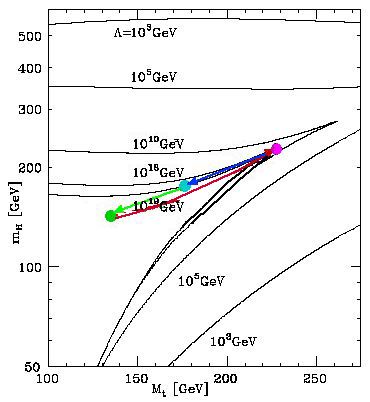 Can Experiments at LHC Decide between Triviality andVacuum Stability ?

Experiments at the LHC may be able to distinguish between the twopossibilities. If the LHC searches for Higgs up to 250 GeV, then:

Since the Tquark peak around 220 GeV is very much lower than thepeaks around 130 GeV and 175 GeV, it may be that even if LHC searchesfor Higgs up to 239 GeV, the 239 GeV Higgs signal corresponding tothe magenta critical point state may be too low to be easilydistinguishable from background. The LHC effort to find the Higgs isdescribed in an October 2006 article by Andy Parker in PhysicsWeb athttp://physicsweb.org/articles/world/19/10/3, which article said inpart ( including some material from a referenced article athttp://physicsweb.org/articles/world/19/10/3/1/PWexp4%5F10%2D06):

"... One of the main goals of the LHC is to discover the elusive Higgs boson, which is responsible for the masses of all other particles ... The huge general-purpose ATLAS and CMS detectors have been designed to make the hunt for the Higgs boson as easy as possible ... Sometime in 2008, the first dispatches will arrive from beyond the frontier ...

... Both CMS and ATLAS are laid out in cylindrical layers of subdetectors but they use markedly different technology. For example, ATLAS is surrounded by eight toroidal magnets, while CMS 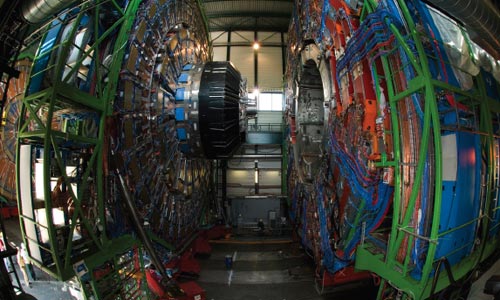 uses a single huge solenoid .. and different materials are used in the calorimeters ... 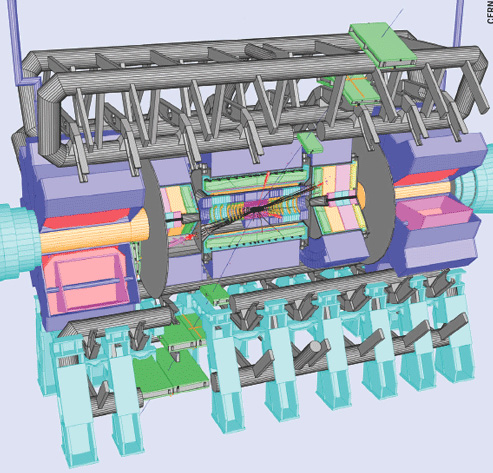 ... weighing some 7000 tonnes and measuring over 26 m in length and 20 m in diameter ... consists of a number of subdetectors, designed to identify and measure different types of particle ... Three main subsystems, are arranged in cylindrical layers around the vacuum pipe that carries the proton beams:

At the LHC, bunches of some 10^11 protons at a time will be accelerated to 7 TeV. As the protons approach the detectors, they will be focused by electromagnetic fields to increase the chance of a collision. About 20 protons will collide each time the beams cross, most being glancing blows. But occasionally, two quarks in the incoming protons will meet head on, creating a "hard" collision in which the energy released can create new massive particles, including the Higgs boson and sparticles, if they exist. ...

Storing all the data read out from each of the billion or so collisions every second would be impossible, so the detectors themselves will be programmed to select only the most interesting events. Dedicated electronic "trigger" systems will inspect the data for high-energy deposits or interesting patterns of particles, accepting only about 0.25% of the events. Farms of powerful computers will be used to further process the surviving events, reducing the number passed onto waiting physicists for analysis to a more manageable 100 events per second.

Even after this massive filtering exercise, over a petabyte (10^15 bytes ...) of data will be recorded each year. Small teams of physicists will work together on their chosen topic, trying to pick out interesting "signal" events such as Higgs decays while removing "background" events that come from known Standard Model processes. In order to do this, we need to understand what the detectors should see from the Standard Model alone, and what the distinctive "signatures" of new particles will be. This is done using "Monte Carlo simulations": computer programs that generate millions of random events obeying the underlying theoretical equations, starting from the hard collision and simulating the paths and decays of all the particles created by it.

These simulations also include a virtual model of the detector, which mimics the response of each detector element as the particles pass through it. The simulated data from this virtual detector are then fed into the same reconstruction program that physicists will use to inspect the real data, allowing them to compare the real data directly with the predictions of different theoretical scenarios. Such Monte Carlo studies have been carried out since 1984, when the case was first made to fund the LHC, and today the ATLAS database contains simulations of over 600 different scenarios. ...

Using the design luminosity of the LHC and a Higgs mass of 250 GeV, we would expect to produce about 10 events containing Higgs bosons every minute. This is a promising start, especially as the detector is designed to run for up to 10 years. ...

The Higgs boson can decay in many different ways, with the probability of a particular type of decay depending on the as-yet unknown mass of the Higgs. From previous experiments, we know that the Higgs mass must be above 114 GeV/c2 - otherwise we would already have seen it - while theory requires it to lie below 1 TeV/c2.

If it has a "low" mass (about 120 GeV/c2), it will most often decay into a bottom quark and antiquark. Unfortunately, it is very hard to tell these apart from the quarks produced in collisions in which no Higgs is present. A low-mass Higgs can also decay into a pair of photons, but it does this much less often - only once in 1000 decays.

However, this decay is much easier to pick out, and there are so many proton-proton collisions that there will still be thousands of these events produced.

If the Higgs has a high... mass (above 180 GeV/c2), then it is most likely to decay into pairs of W and Z bosons. The easiest signal to identify occurs when the Higgs decays into two Z bosons, which each decay in turn into a pair of electrons or muons. This signature of four leptons can be easily identified by the detector, and is not often produced by unknown Standard Model processes. Furthermore, by measuring the momentum of each of the leptons, it is possible to reconstruct the mass of the parent particle of each pair. Hence, particle physicists will home in on this type of decay by looking for two pairs of leptons in an event, the momenta of each of which "add up" to a value close to the known mass of the Z boson. Taking this idea further, the momenta of the two Z bosons can then be used to derive the Higgs mass. ...".

Note also that for a Higgs to decay at a high rate into a Tquarkand a Tbar antiquark, the Higgs mass would have to be at least twicethe Tquark mass, or 2x130 = 260 GeV for the lightest Tquark state inmy model, or 2x175 = 350 GeV for the 175 GeV Triviality Tquark 8-dimKaluza-Klein state that is recognized by Fermilab analysts, or 2x218= 436 GeV for the 218 GeV Critical Point BHL state, and none of thethree Higgs states in my model ( 146 GeV, 188 GeV, and 239 GeV ) areheavy enough for such decay into a T-Tbar quark-antiquarkpair.