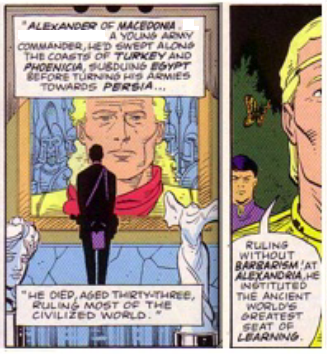 At 323 BC Alexander the Great created an Empire reaching from Greece to Egypt through Persia.

Alexander's Empire of Conquest fragmented shortly after his death.


To the East, a Century later the Warring States of China were united by the Qin. 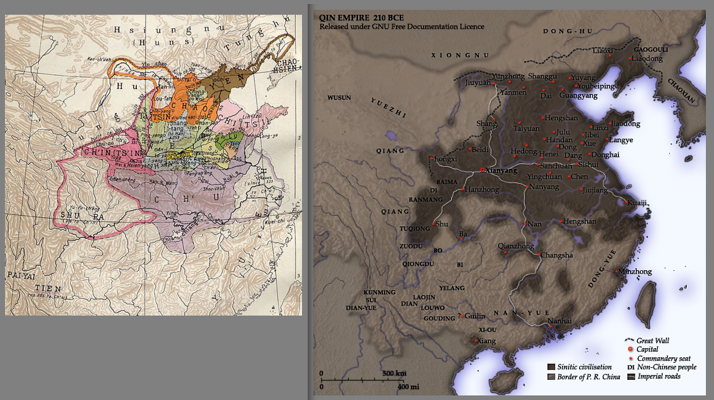 The Qin Empire of Conquest did not last long either.
However, it did not fragment but was succeeded by the Han Dynasty. 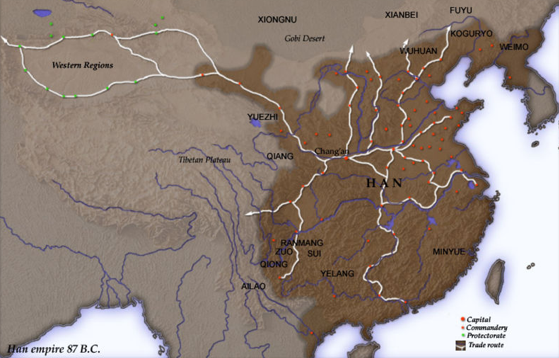 To the West, a Century after Alexander saw the emergence of Rome and Carthage. 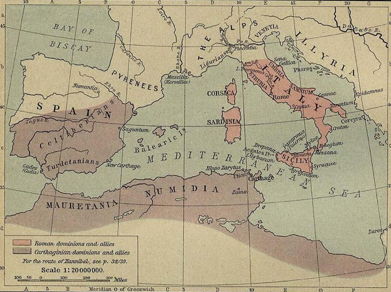 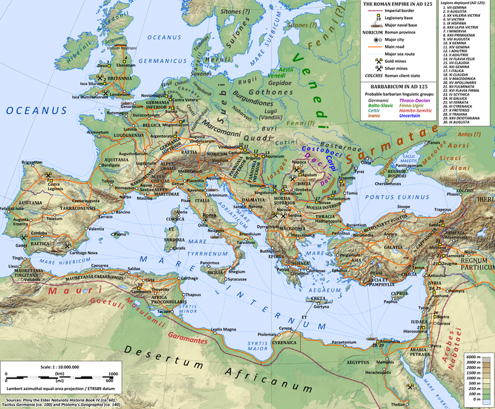 Some Early Romans migrated to China. According to the People's Daily Online "... The Romans who migrated to China changed their name and became a source of the surname Qin. ... At the beginning of the Western Han Dynasty the Qin-surnamed mainly inhabited  in the central Shaanxi plain. ...".
My father's paternal lineage was Roman.
When I was a child, he told stories of the adventures of a Chinese he called Zhonghua Qin (I heard his pronunciation as something like chunka chin). Although my father never told about the origin of the name, now I see that he used the Western order of surname last (an order sometimes used for the name of the immortal Tieguai Li).
"... Zhonghua is a ... literary term used ... in the name... of ... the People's Republic of China ... The first character zhong ... means central or middle ... The Records of Three Kingdoms uses the concept of the central states in "Zhonghua" ...
Zhonghua ... represented the people, including 56 ... ethnic groups and the Han Chinese, with a single culture ..." (from Wikipedia entry "Names of China").
From my father's paternal lineage point of view, I think that Zhonghua Qin was an immortal shen with Roman origin and Chinese culture (comparable to some aspects of Tieguai Li and HuangLao).
I wish that I recalled the details of the adventures of Zhonghua Qin, but I was very young when my father told them and my memory is not so good. Some of them were sort of like well-known stories such as those of the 8 immortals and some of them were about Zhonghua Qin interacting with mountain and forest animals and spirits.

whose trade routes (green on the map) "stretched from Western Europe to Eastern Asia ...
centuries before Marco Polo and ibn Battura ... some believe that Jewish merchants such as the Radhanites were instrumental in bringing paper-making west. Joseph of Spain, possibly a Radhanite, is credited ... with introducing the ... Hindu-Arabic numerals from India to Europe. ... Jewish communities used letters of credit to transport large quantities of money ...
the Radhanites may be counted among the precursors to the banks that arose in the Middle Ages ...
The fall of the Tang Dynasty of China in 908 ... and the rise of the mercantile Italian city-states ... who viewed the Radhanites as unwanted competitors ... led to ... the disappearance of the Radhanites ...".
(quote from Wikipedia)
Over the next 1000 years China evolved into its present Peoples Republic
and
the Roman Empire evolved to the Pax Britannica and  the present USA/NATO controlled by the Western Bankers that had evolved from the Radhanites
so
now Earth has two major power centers:
USA/NATO (blue with gray client states) and China/SCO/BRIC (red and green) 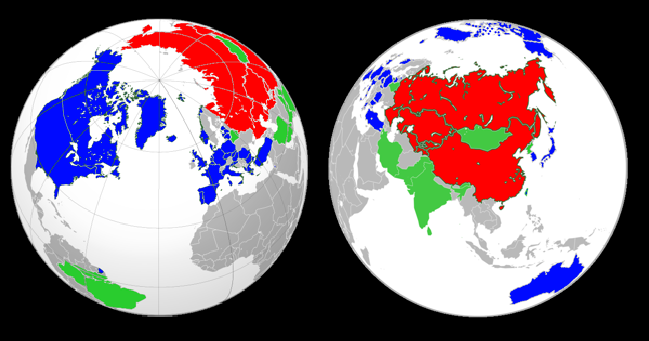 Now, when USA/NATO and China/SCO/BRIC have conflicts of interests,
there is no Alexander the Great with authority to resolve issues
and
there is no trusted Radhanite intermediary to mediate issues.

"... Since ... about 1970 ... capital [ of the USA/NATO banking system ]
has not so much sought growth through increased production
[which is how the Radhanite financiers had profited from increasing levels of trade ],
but rather by extracting greater returns from relatively flat production levels.
Hence globalisation, which moved production to low-waged areas, providing greater profit margins.
Hence privatisation, which transfers revenue streams to investors that formerly went to national treasuries.
Hence derivative and currency markets, which create the electronic illusion of economic growth, without actually
producing anything in the real world. ...
And then in September 2008 this house of cards collapsed, all of a sudden ...
capitalism was not allowed to die a natural death. Instead it was brought down by a controlled demolition.
First it was put on a life-support system ... with globalisation, privatisation, currency markets, etc. ...
Finally, the Bank of International Settlements in Basel - the central bank of central banks -
pulled the plug on the life-support system:
they declared the ‘mark-to-market rule’, which made all the risk-holding banks instantly insolvent ...
this process was carefully planned and managed by the central-banking clique. ...
The effect of the coerced bailouts was to transfer insolvency from the banks to the national treasuries.
Banking debts were transformed into sovereign debts and budget deficits.
Now, quite predictably, it is the nations that are seeking bailouts, and those bailouts come with conditions attached.
Instead of the banks going into receivership, the nations are going into receivership. ...
In the EU, the first round of nations to go down will be the so-called PIGS – Portugal, Ireland, Greece, and Spain. ...
Eventually the PIGS will be forced to default, and then the rest of the EU will go down as well ...
now in Europe, ... IMF diktats ... are all about austerity and privatisation. ...
the nation state is dismantled ... the primary functions left to government are police suppression of its own population ...
with the WTO, IMF, World Bank, and the other pieces of the embryonic world government,
the new global system will make no pretensions about popular representation or democratic process.
Rule will be by means of autocratic global bureaucracies,
which will take their orders, directly or indirectly, from the bankster clique. ...".
(quote from 4 November 2011 nwoobserver.wordpress.com article by Richard K. Moore from 18 October 2011 New Dawn Magazine)


When in 2011 USA/NATO asked China/SCO/BRIC give "... some of ... China's ... $3.2 trillion (£2.01 trillion) in
foreign exchange reserves to ... rescue ... Europe ... China ... offered help in return for European support to grant it either
more influence at the International Monetary Fund,
market economy status in the World Trade Organisation,
or the lifting of a European arms embargo
... China's ... hopes were dashed ...[by]... IMF chief Christine Lagarde ...
Europe's rejection of China's demands - particularly the inclusion of the renminbi in the SDR -
was tantamount to "a slap in the face" ...".
(quote from 11 November 2011 Telegraph Reuters article)

The "slap  in the face" refusal to let China/SCO/BRIC have a seat
at the policy-making table of the USA/NATO IMF-WTO-WorldGovernment
showed that China/SCO/BRIC must rely on its own independent efforts to advance its interests which include
"... a major African economic diplomacy which reached a crescendo in 2006 ... 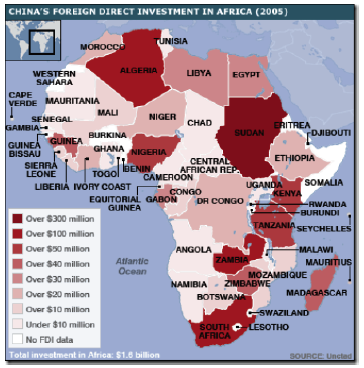 
USA/NATO response to China/SCO/BRIC assertion of its interests in Africa include "... The Washington-led decision by NATO to bomb Gaddafi’s Libya into submission over recent months, at an estimated cost to US taxpayers of at least $1 billion, ...[as]... part of a larger strategic assault by NATO and by the Pentagon in particular to entirely control China ...
the recent [2011] wave of Western military attacks against Libya or more covert regime changes such as those in Tunisia, Egypt and the fateful referendum in southern Sudan which has now made that oil-rich region “independent” has been AFRICOM, the special US military command established by the Bush Administration in 2008 explicitly to counter the growing Chinese influence over Africa’s vast oil and mineral wealth. ...".
(quote from 26 September 2011 nwoobserver.wordpress.com article by F. William Engdahl from 25 September 2011 Global Research)

China has begun to prepare to respond to such attacks.
"... Vast, unidentified, structures have been spotted by ... Google Earth ... in the barren Gobi desert ... 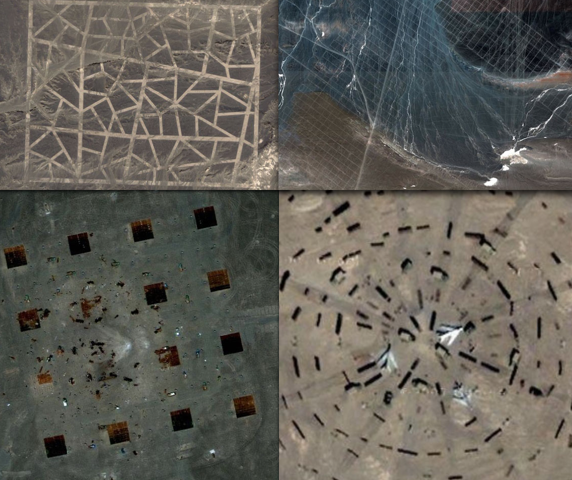 ... raising questions about what China might be building in a region it uses for its military, space and nuclear programmes. ...
The picture of the circle looks very like a missile test range, with ... instrumentation set out to record weapon effects. ...".
(quote from 14 November 2011 Telegraph article by Malcome Moore and Thomas Harding)

The square array looks like another missile test range weapon effects site,
and the grids (irregular wide lines and rectangular narrower lines) look to me like power grids
that might be tested for EMP effects by air-burst nuclear weapons.
Such atmospheric nuclear tests can produce Iodine-131, and
"... The UN atomic agency said ...[on 11/11/11 that]... "very low levels" of radioactive iodine-131 had
been detected in the air in the Czech Republic and in other countries ...".
(quote from AFP by Google News)

Will the Contemporary Confrontation of
Aggressive Militarism of  USA/NATO with Determined Independence of China
lead to World War III
?

Who would be more likely to survive such a Conflict ?

Is there any component of USA/NATO IMF-WTO-WorldGovernment that
can negotiate reasonably with China to share power on Earth,
or  is
Earth Not Big Enough For Both
???