James Monroe Neel, Jr., and I (Frank Dodd (Tony) Smith, Jr.) werelaw partners in the Cartersville, Georgia, law firm of Neel &Smith for about 20 years from the 1960s until 1987, when I withdrewto spend more time on my physics work. Our office building was at 132West Cherokee Avenue. Jimmy had the front ground floor office, and Ihad the back ground floor office, in the 2-story part of thebuilding. Each office had a fireplace with gas logs, using a sharedchimney. 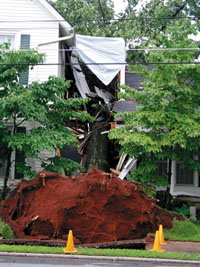 a tree fell on the building, which was then owned by William A.Neel, Jr. In December 2003 Billy decided to tear down the 2-storypart of the building. This

is how it looked on 23 December 2003, after Federick Knight (andhis sons Stiles and Stovall) had begun tearing it down.

As shown in this 2 January 2004 picture, the chimney was pulleddown

The day the chimney fell was the day that Jimmy died.