According to http://www.debka.com/ ... "... November 1, 2006 ...the USS Eisenhower is at sea off the Saudi Arabian coast, togetherwith another aircraft carrier, the USS Enterprise. ... there are nowthree US aircraft carriers in the Persion Gulf and surroundingwaters, including the USS Iwo Jima ... a fourth US aircraft carrier,the USS Boxer, will arrive on the scene together with its carrierstrike group ...". 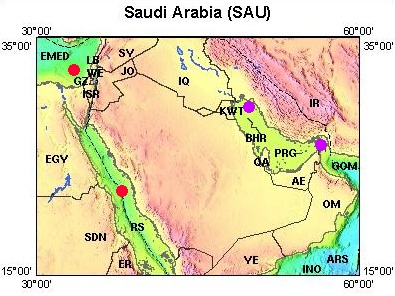 As to tactical reasons for the four carrier groups, consider apossible tactical disposition shown above, with the air power carriergroups ( Eisenhower and Enterprise ) shown in red and the marineexpeditionary carrier groups ( Iwo Jima and Boxer ) shown in purple:

Indigenous Iranian assets could probably not do severedamage to the carrier groups, but what if China and Russia give Irana lot of advanced missiles ?

Also according to http://www.debka.com/ ... "... November 5, 2006... scores of surface missiles - a record for any war games anywhere- were tested simultaneously at a desert testing site some two hoursdrive from Tehran Thursday, Nov. 2. ... A senior American missileexpert told DEBKAfile that the Iranians demonstrated up-to-datemissile-launching technology which the West had not known them topossess. They also displayed unfamiliar warheads. But their moststartling feat was the successful first test-fire of the long-rangeShehab-3 with its cluster of tens of small bomblets ... The entirerange bore the imprint of new purchases from China. ThisShehab-3, whose 2,000-km range brings Israel, the Middle East andEurope within reach - may be more than a match for anyanti-missile missile system in American, Israeli or Europeanarsenals ...".

The USA might have hoped that even if Iran has missiles that cankill carriers, Iran might not have accurate targeting information andtherefore the Iranian missiles might be useless.

However, according to a 11 November 2006 article on Breitbart.com... "Iran's Arabic language television station broadcast footage itclaimed showed a US aircraft carrier cruising in Gulf waters ...

... it said was taken by an unmanned Iranian drone. ... "A sourcein the Revolutionary Guard said the drone carried out its missionwithout US fighter pilots reaching it," the television said. ...".

So, if Iran knows location of the USA carrier groups and hasmissiles capable of sinking the ships, what might happen in ashooting war ? According to a War Nerd web page athttp://www.exile.ru/archive/by_author/gary_brecher.html dated 11December 2002:

"... anti-ship missiles ... can destroy a US aircraft carrier. That means that the hundreds of trillions (yeah, trillions) of dollars we've invested in shipbuilding is wasted, worthless.

A few years ago, a US submarine commander said, "There are two kinds of ship in the US Navy: subs and targets."

The fact that big surface ships are dinosaurs is something that's gotten clearer every decade since 1921. ... the aircraft carrier is now: a big, proud, expensive...sitting duck. Aircraft carriers came out of WW II looking powerful, but that was before microchips.

Now, when an enemy tanker can fire 60 self-guiding cruise missiles from hundreds of miles away, no carrier will survive its first real battle. Carriers are not only the biggest and most expensive ships ever built - they're the most vulnerable. Because even one serious cruise-missile hit means the carrier can't launch its planes, its best weapons. They will sink to the bottom with their crews, not having fired a shot. ...

As weapons become smaller and deadlier, big targets just won't survive. ... Anti-ship missiles are easy to make and use, because surface ships are very slow, have huge radar signatures, and can't dodge.

We may be lucky a little while longer, as long as we take on losers like Iraq. But what about Iran?

The Iranians aren't cowardly slaves like the Iraqis. They're smart, they're dedicated, and they hate us like poison. ... Give the Navy the benefit of the doubt and say they get 90% of the incoming missiles. You still end up with a dead carrier. ... One day we'll wake up to a second Pearl Harbor.

... if Iran gets involved, those carriers won't last one day. ... And the sickest part is that the admirals and the captains and the contractors all know it.

Maybe we deserve what's gonna happen to us. Only thing is, it won't be the brass who die. It'll be the poor trusting kids on those carriers who'll die, the poor suckers who thought they'd get free training and a world tour, or even get the chance to "defend America." They'll die not even believing what's happening to them as the whole giant hulk starts cracking up and sliding into the water. ...".

If that happens, what would the USA do ?

Thousands of USA sailors would be dead in their sunken ships,leaving the USA a choice of:

Option B might not be popular with powerful USA interests based onhigh profits from cheap Persian Gulf oil.

Fiurther, even USA election of Option B might not avoid a majorregional war, as Israel might elect on its own to take out by airattack the Iranian nuclear facilities before Iran puts nuclearwarheads on its missiles and carries out the stated tbreats of itspresident Ahmadinejad to exterminate Israel.

Just one sad example of dumb policy of the USA after taking Iraqwith a brilliant assault force ( that has been degraded by failure ofthe USA to insert a large occupation force following the assault,compounded by forcing assault soldiers ( kill anything that moves )to try to perform occupation duty ( act like friendly cops onneighborhood beats winning hearts and minds, a totally differentmindset from assault ) can be see in a 9 November 2006 BBC webarticle by Mark Gregory athttp://news.bbc.co.uk/go/pr/fr/-/1/hi/business/6129612.stm that saidin part:

"... Stuart Bowen is the special inspector general for Iraq reconstruction. ... Mr Bowen said billions of dollars were shrink-wrapped in plastic and flown out of the US to Baghdad. "It was $2bn a flight, and I know of at least six flights," he said. Mr Bowen said some of the cash went to pay the salaries of thousands of "ghost employees", or Iraqi civil servants who did not actually exist. As the planes landed with their hefty bundles of greenbacks, they became the responsibility of a man named David Oliver. Mr Oliver was in Baghdad in the summer of 2003 as the CPA's first head of finance. He helped establish the financial framework, but resisted pressure to bring in outside auditors. ... As head of finance at the time surely he must know what happened to the $8.8bn? "I have no idea, I can't tell you whether or not the money went to the right things or didn't - nor do I actually think it is important," he said. Yes, but the fact is that billions of dollars have disappeared without trace. ...

So what have we got? Allegations of impropriety in the awarding of contracts in the US, chaos at the occupation authority that ran post-war Iraq and large sums of Iraqi oil money disappearing apparently without any record of how it was spent. And all this on America's watch. ...".

All these circumstances seem to me to be building up to TerrenceMcKenna's 2007 Timewave Peak: