The key to solving Penrose's Puzzle is given by Paola Zizzi ingr-qc/0007006:

"... during inflation, the universe can be described as asuperposed state of quantum ... [ qubits ].

The self-reduction of the superposed quantum state is ...reached at the end of inflation ...[at]... the decoherencetime

... This is also the number of superposed tubulins-qubitsin our brain ... leading to a conscious event. ...".

The Zizzi Inflation phase of our universe ends withdecoherence "collapse" of the 2^64 Superposition Inflated Universeinto Many Worlds of the Many-Worlds Quantum Theory, only one of whichWorlds is our World. 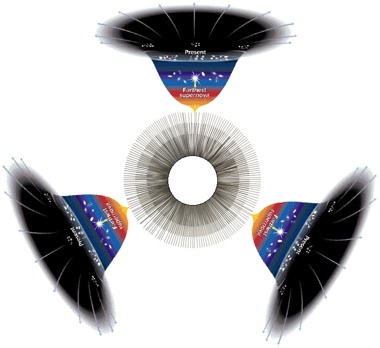 Penrose (in his book The Emperor's New Mind (Oxford 1989, page339)) proposed that the solution of his Puzzle might be related toWeyl Curvature, saying "... For some reason, the universe was createdin a very special (low entropy) state, with something like the WEYL =0 constraint of the FRW-models imposed upon it ...".

Here is how such a WEYL = 0 constraint may be related to the lowentropy due to a Many-Worlds decoherence "collapse" at the end ofZizzi's Inflation:

"... Weyl's ... 1918 paper ... showed how a geometrical significance could be ascribed to the electromagnetic field ... in 1922 ... Shroedinger ... suggested ... the flaw in the original Weyl theory might be removed by quantum mechanics ... the exponent of the non-integrable Weyl factor became quantized ...

... London in his 1927 paper ... establish[ed] the relation between Weyl's non-integrable scale factor and the gauge principle as it ocurs in the Hamilton-Jacobi, de Broglie and Schroedinger equations ... it is the complex amplitude of the de Broglie wave ... The fault in Weyl's original theory lay not in the presence of Weyl's non-integrable scale-factor but in the fact that it was real and applied to the metric. It should be converted to a phase-factor and applied to the wave-function. ... Weyl's reaction ... was ... enthusiasm ... in ... 1929 ... electromagnetism is an accompanying phenomenon of the material wave-field and not of gravitation ...

... Pauli proceeded to incorporate many of Weyl's ideas into his Handbuch article and by 1953 he had become an ardent proponent of the gauge principle ...".

From The Anthropic Cosmological Principle, by Barrow and Tipler(Oxford 1986, pages 446-447):

The Weyl tensor WEYL measures a tidal distortion of our sphere of freely falling particles (i.e., an initial change in shape, rather than in size), and the Ricci tensor RICCI measures its initial change in volume. ... the Weyl tensor ... is an important quantity. The tidal effect that is experienced in empty space is entirely due to WEYL. ... there are differential equations connecting WEYL with ENERGY, rather like the Maxwell equations ... a fruitful point of view is to regard WEYL as a kind of gravitational analogue of the electromagnetic field quantity ...".

These remarks of Penrose seem to me to justify seeing the Weylcurvature as a Weyl gauge quantum phase for a Bohm-type QuantumPotential, especially in view of my model in which the Bohm-typeQuantum Potential comes from what is commonly viewed as agravitational part of Bosonic String Theory and in which Many-Worldsgravitational superposition separation plays a fundamental role inQuantum Consciousness.

Since, from the Many-Worlds point of view, the branching ofthe Worlds of our Universe as time moves forward towards the futuremight give a realistic definition of gravitational entropy Sg and

since Deutsch has indicated that the Bohm potential can be seen tobe equivalent to Many-Worlds Quantum theory,

it seems to me that

the Weyl-Schroedinger-London-Santamato description of the Quantumpotential in terms of Weyl curvature could be seen as Penrose's Weylcurvature entropy.

the fact that the Weyl curvature WEYL is the conformal partof the RIEMANN tensor is interesting,

the unification of RICCI for gravity and WEYL for quantumpotential indicate to me that Jack Sarfatti's idea that BOTH shouldhave back-reaction is correct.