On 1 September 2006 GITS SAC Solid State Society (a 100 minutemovie) was broadcast to Japan on SkyPerfecTV, and over the USA LaborDay Holiday Weekend a rough cut (Japanese language only with nosubtitles) was shown at DragonCon in Atlanta, USA. (image immmediately below from MasamuneShirow Hyperpage: Lucas' Masamune Shirow Fan Page: Archives for:March 2006 ) 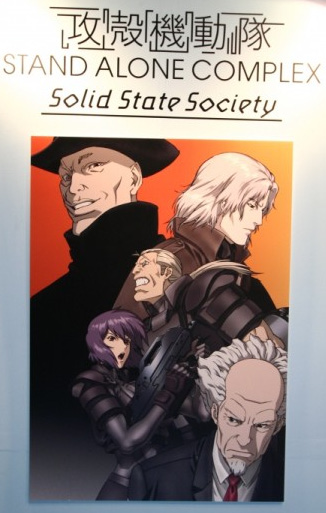 The physical bodies of the top two figures (Goda and Kuze) werekilled at the end of GITS SAC 2ndGIG, as was the satellite containingthe Quantum Consciousness of the Tachikomas. 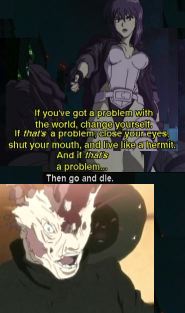 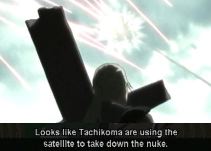 However, the fate of their presence on the net was leftopen.

In my opinion (based in part on the AtlantaDragonCon screening):

Goda, Kuze, and the Tachikomas all survived on the net, and allthe characters shown in the poster above (Goda, Kuze, Batou, Motoko,Aramaki) are accessible to other net-beings (and each other), and allthe net-beings can interchange characteristics with each other,producing a dynamic wide variety of possibilities, as seen by Motokoconnecting as net-being with the leader of the Solid State Society.As stated in the manga Ghost In The Shell - Man-Machine Interface:"... 2035 ... Motoko Aramaki is a hyper-advanced cyborg ... Partlytranscending the physical world and existing in a virtual world ofnetworks, Motoko is a fusion of multiple entities and indentities,deploying remotely controlled prosthetic humanoid surrogates aroundthe globe ... the sword ... science and technology ... the mirror ..and the jewel ... religion ... are all together now ...".

Although the material beings of Goda and Kuze were destroyed, thematerial beings of the Tachikomas were not involved in the satelliteinterception of the nuclear missile, so they could be reactivatedfrom distributed copies of their Quantum Consciousness on thenet.

In the material world, the Tachikomas could be the children ofBatou and Motoko, 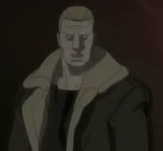 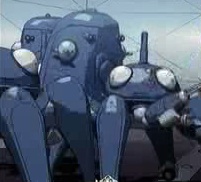 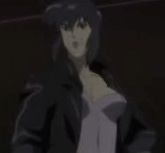 and so they could be the "successors" mentioned by Motoko inepisode 26 of Ghost in the Shell: Stand Alone Complex, in Motoko'sfinal conversation with the Laughing Man:

according to HK/DVD subtitle Motoko says "I found one of the possibilities" and then holds up a Tachikoma Quantum Consciousness Computer Chip and says "A successor [ kokeisha ] I think so";

When I listen closely to the Japanese audio, it is clear to me that Motoko is saying "kokeisha hai" which is consistent with the HK/DVD subtitle and the concept of Tachikomas as material "successors"/ children of Motoko and Batou.

In the material world, the Solid State Society was based in TwinTowers buildings 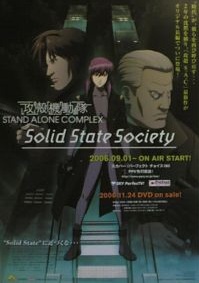 shown in the poster immediately above ( from aWikipedia page ). Material beings Togusa, Motoko, Batou, and theTachikomas thwarted an effort by the material members of the SolidState Society to infiltrate (by micromachines) and overthrowhuman-led society, as predicted by Goda in episode 22 of 2nd GIG, inBatou's discussion with Goda on the top of the building:

according to HK/DVD subtitle Goda says "If I was a criminal … I'd have all the cyborgs [ dotai deta jinshu ] … Revolt [ kamae bodo ]? …"

according to the Bandai USA English subtitles and dubbing

Goda says "Well, if I were the culprit … the factor I would probably use is that they were a virgin [ dotei ] prior to getting a prosthetic body. …".

When I listen closely to the Japanese audio, it seems clear to me that Goda did not say "dotei" or "male virgin",

but in fact said "dotai deta jinshu … kamae bodo …" or "body [made of] data race … martial posture insurrection …" or "race of cyborgs … martial posture insurrection …" or "race of cyborgs ... riot stance ...", which seems to me to be equivalent to "... all the cyborgs .. revolt ..." and to be consistent with the material world revolt of cyborgs of the Solid State Society that was thwarted by material Togusa, Motoko, Batou, and the Tachikomas.

All in all, it appears to me as though the Solid StateSociety movie is an alternate-universe (Motoko with burnt siennaeyes) version of the events of the first movie (Motoko with greyeyes). Maybe there are many alternate uiniverses in the Many-Worlds,since in the first movie Motoko (in a restaurant in a tall building)

sees herself (in a canal tour boat). In the first movie version,Motoko (in the body of a young girl) leaves Batou's safe house on herown to explore "... the vast and limitless ... net ...", while at theend of Solid State Society the material bodies of Motoko and Batouand the Tachikomas are all in Batou's safe house together as amaterial family.

"... Ghost in the Shell: S.A.C. Solid State Society ... is the 2006 anime film based on Masamune Shirow's Ghost in the Shell: Stand Alone Complex series, which is set on the manga universe of Ghost in the Shell. It is produced by Production I.G, who announced the film at the 2006 Tokyo Anime Fair, and is directed by Kenji Kamiyama ... the film will premiere in Japan on the satellite anime PPV channel SKY PerfecTV! Perfect Choice ch160, on September 1, 2006. ...

The story takes place in 2034. It has been two years since Motoko Kusanagi left Section 9. Togusa is now the new leader of the team, which has considerably increased its appointed personnel. The expanded new Section 9 confronts a rash of complicated incidents, and investigations reveal that an ultra-wizard hacker named the Puppeteer is behind the entire series of events.The new event starts with 13 terrorists sharing a Sanskrit script tatoo ...

... They take hostages in an airport, and commit serial suicides. Section 9 steps in to conduct a counter terrorism investigation, and succeed in cornering one terrorist whose last words before committing suicide confirm the existence of "super wizard" class hacker Kugutsu Mawashi ... roughly translated as "Puppeteer", but different from Ningyo Tsukai of the first movie ... In the midst of everything, Batou encounters Motoko while investigating the case from a different angle. Before leaving, she warns him to "Stay away from the Solid State Society." ...".

According to anesamskriti web page:

"... Buddhism was officially introduced into Japan from Korea in 552 a.d. when an image of Buddha and some copies of Buddhist scriptures were brought to the Japanese court by a representative of the Korean king of Paikje. ... ancient Sanskrit manuscripts in old Brahmi characters preserved intact in Horyuji, the most ancient monastery extant in Japan, and some other monasteries ... are older than what we have in India i.e. 6th century as compared to 10th century in India. ...

It is said that Dosho 700 a.d. went to China to study Vijnaptimatrata i.e. Buddhist idealism as well as the Buddhist system of logic under Hiuen Tsang. He returned to Japan in 661 and began to teach Buddhist logic from the Genkoji temple. ...

Bodhisena a great Buddhist from India visited Japan in 736 on a special invitation from Emperor Shomu, used to teach Sanskrit and the Hua-yen (Gandavyuha-Sutra) in different monasteries of Japan. ...

Japanese like Korean also suffered from the handicap of not having a national script for the first few centuries of the Christian era. The Chinese language and its written characters had obtained vogue in the land, particularly among the official class. ... But Chinese was unsuited for the Japanese language, as the latter was phonetic while the former was ideographic. The Japanese language like Sanskrit is inflectional. ...

The forty-seven letters of the Japanese alphabet are said to have been devised by the Japanese Buddhist saint Kobo Daishi 774-835, after the Sanskrit alphabet.

The arrangement of the Japanese syllabary based on the Sanskrit system is also attributed to the influence of Bodshisena in Japan ... the old Japanese song 'Iroha-uta' which contains all the 47 Japanese letters, is a liberal translation of a Sanskrit Buddhist hymn in the Mahaparinirvana-Sutra.

The Indian script known as Siddham ... gained currency in Japan for writing Sanskrit from the 8th century. It was introduced by Kobo who was responsible for bringing Mantrayana Buddhism from China to Japan. ...

... the text Shittan-zo (Siddham Ratnakara) written by An-nen in 880 a.d. ... narrates at the beginning what is known from the original Chinese sources about Sanskrit and the Siddham script. ... Each of the letters of this script is deemed to be a bija and identified with a deity. ...".

"... The Siddham script is mainly used by Shingon Buddhists in Japan to write out mantra and sutras in Sanskrit. ... The Siddham script is a descendent of the Brahmi script and an ancestor of the Devanagari script. The name Siddham comes from Sanskrit and means "accomplished or perfected" ... It was introduced to Japan by Kukai in 806 AD after he had studied Sanskrit and Mantrayana Buddhism in China.

In Japan the Siddham script is known as 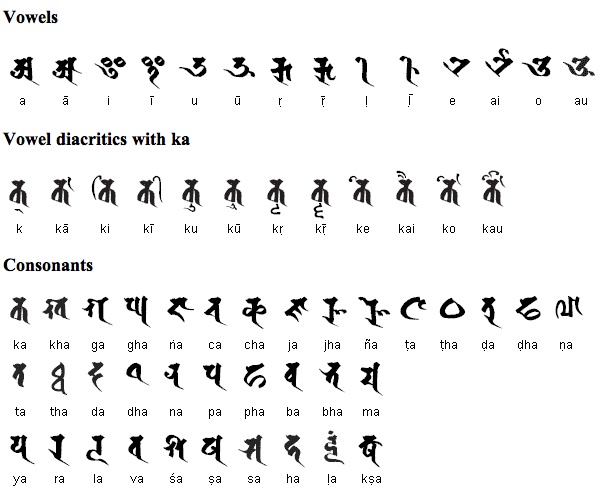 Sanskrit is also the closest humanlanguage to computer language. See the paper KnowledgeRepresentation in Sanskrit and Artificial Intelligence, by RickBriggs in AI Magazine Contents, Volume 6 (1985)http://www.aaai.org/Library/Magazine/vol06.php Unfortunately, itseems that the full article is no longer available free on-line, butit was freely available some time ago, and I put up some materialabout it on my web site at http://www.valdostamuseum.org/hamsmith/RgVeda.html#sansinfo.