I recently discussed the complex situation of single topproduction searches in CDF inhttp://dorigo.wordpress.com/2006/11/07/the-elusive-single-top/ (and seehttp://dorigo.wordpress.com/2006/11/20/a-low-mass-top-in-single-top-events/for an exotic interpretation of those results). To summarizehere, despite a huge effort by CDF, no clear indication of thesignal is present in the data so far analyzed - one analysisfinds a 2.6-sigma excess over backgrounds, but another study based onthe same data sees no signal at all; and the 2.something-sigma effectarose suspicion in some that there be something unexpected in thedata.

The a-priori best measurement of the set provides a cross sectionof 4.9+-1.4 picobarns, when 2.9+-0.3 pb is the next-to leading ordertheory prediction. This cannot be dubbed an "observation" yet (whichis a word reserved for 5-sigma effects in physics jargon), but itcomes close to it, and it would be very strange if the 3.6-sigmaexcess of D0 did not grow to observation level in the next fewmonths, as more data will be fed to the analysis.

What's more, D0's excess appears to cluster at the right top massvalue, and not at low mass as some of CDF's - an indication thatthings are going fine and that the standard model still rulez.Indeed, single top production is a purely electroweak process - atleast in one of the two production channels - and surprises therewould be twice as much puzzling. You can see some of the D0 signal inthe plot ... 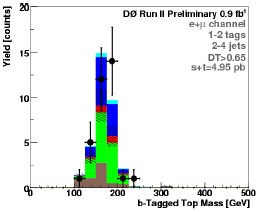 ... where the reconstructed top quark mass is plot for the dataand compared to backgrounds (in grey, green, and red) and signal (theblue stuff).

If you are curious about the details of the analyses by D0, Iencourage you to have a look at the slides linked above. If you arelazy, I offer below a poor-man description of thewhole thing…

Events triggered by the presence of a high-momentum electron ormuon are collected in a 0.9 inverse-femtobarn dataset, significantmissing transverse energy is required, and two or more jets. Aneural-network B-tagger finds very effectively jets which are likelyto have originated by b-quark hadronization, thus enriching the datawith the single top production signal, which should nominally yield aW (yielding the lepton and missing Et) and two b-quarkjets (plus an additional light-quark jet in some cases). Thedata is then studied by a decision tree, which uses many kinematicalvariables to discriminate the signal from all known backgroundsources. A cut on the decision tree output enriches the survivingdata of signal to the level that an excess is observed. The mostdiscriminating kinematical variables (such as the one shown in theplot above) are then studied to verify that the excess sits where itis expected from single top production. From the excess a crosssection is computed by taking into account the amount of dataanalyzed and the selection efficiencies.

Still curious ? Go to the talk!

as usual, you're welcome, and as usual my answers have a fairchance of being only partial answers to your questions. However Iwill try to do my homework.

I don't know D0's decision tree well enough myself, but I know thelist of variables which are fed in the trees, from slide 24. 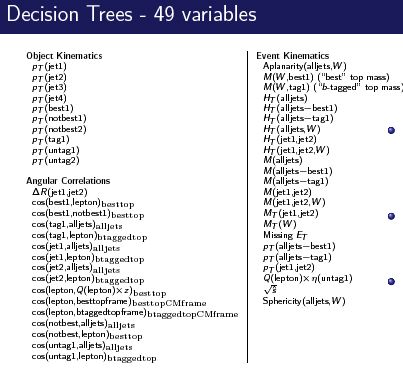 There, you can see that they put in the "best" top mass as akinematical selection variable. Moreover, many other variables whichare directly correlated with the top mass itself are fed into the DT.It is a perfectly legal thing to do, but once you do it, you have tobe careful to interpret the results. In particular, a single topproduction process with a mass different from that with which youbuilt your trees (your "signal") will be treated as a background ifthe mass difference is large enough to make the branches splitregular top and low-mass top differently.

What would tell us if that is really the case would be therelative weight that the final trees give to each of the variables.If the top mass is one of the vars which is given most weight indetermining how to classify the event, then any top signal with masssignificantly different from 175 GeV would be washed out.

Be careful here, "weight" is not a very well defined quantityhere. Some decision tree algorithms have a built-in way to determinea posteriori (i.e. when the trees are built) what weight did avariable have in selecting signal from backgrounds. Others don't. Iwould not be surprised if, by asking D0 what weight does the "best"top mass have in their DT, you got a perplexed look in return, orworse, a layman explaination that the DT is not a neural network. Butthey might also answer with a number straight away :)

In any event, I have the answer myself. If you look at the plots,they speak to you. The three distributions at DT<0.3, 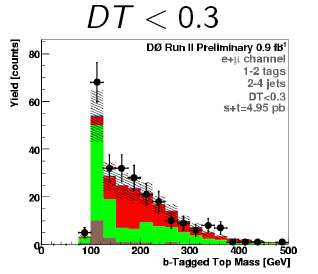 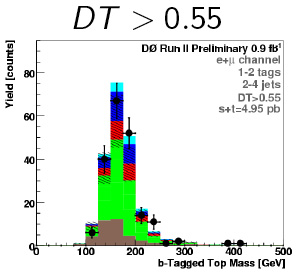 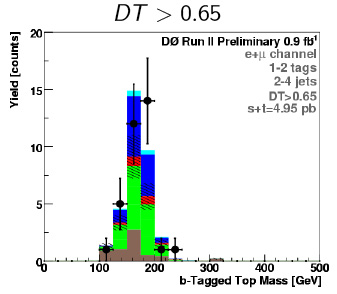 are VERY different in the "best" top mass. AND, the high-DT datahave a perfectly coincident distribution for all backgrounds and forsingle top. THat is to say, that variable has been totally "squeezed"for its discriminating power by the classifier. In other words, whatone can gather from that plot is only the relative normalization ofthe expected contributions to the data points, since shapes will becoincident. A point of relevance: the relative normalization of thevarious colors

tells you indeed that the high-DT data favors the SM single topwith respect to backgrounds, as it should. But it does so based onthe top mass itself, and therefore that variable is no longer a verygood one to display the final result! In fact, one would prefer tokeep the most discriminant variable aside, and train one's classifierwith the others, being careful to avoid variables that are correlatedwith the most powerful one: that way, one would retain discriminatingpower in the best variable _after_ a cut on the classifier's output.That is the strategy adopted for higgs searches at low mass in CDF,where the higgs mass is left aside, being very discriminant byitself.

Not necessarily. Low DT means low probability of a 175 GeV top,given a lot of final state quadrimomenta. So a lower mass top quarkmight get a low grade and end up there. By the way, have you noticedthe tell-tale dip at 175 of the W+jets background ? That is the signthat events with that mass are preferentially high-DT ones, if thereare no more striking characteristics telling them apart from theSingle top hypothesis - for instance, ttbar does not get such a voidat 175 because there are more useful variables to discriminate itfrom single top, and it clusters at 175 anyway...

All good - but we are discussing very insignificant flukes here.The error bars are generally larger than any discrepancy...

Again, not so given what I wrote above.

Careful here, they are plotting only single-tag =2 jet eventshere. THey have 36 subsets of data, which pass through as manydifferent decision trees. One would need to examine all of them tomake any conclusion, and by eye you could anyway draw onlyqualitative ones...

I bet not... You need to go hat in hand to the D0 folks. Even ifthey do issue a paper on the analysis, the gory details will not beso clear as you would want them to be.

Not necessarily physical - statistical probably. If systematic,then maybe it is connected to their way of training trees with somany variables correlated to each other. Usually, decision trees mayget "overtrained" in such circumstances, and a way to avoid that isto do a random sampling of the variables used at each branching, andgrow a huge number of trees rather than a single one, then askingtrees to "vote" for a hypothesis. The random forests algorithm issuch a delicious thing, I have a post about it which links to ainformative site on that particular algorithm if you want moreinformation. The post is from the beginning of June I think, so youcould dig in my blog and find it. If you don't find it, and if youwant it, let me know...

I think more data always helps, provided you are willing to let agood hypothesis go if the data disprove it. But it is good to bestubborn for a while longer, especially since nobody did really asearch focused on low-mass single tops...

I will try to answer some questions below.

I think there is already an attempt in CDF to look for the unknownwithout any preconception besides the existence of what is alreadyproven to exist. These are "model-independent" searches. Not blessedyet, but they look for some thousands of permutations of interestingfinal states involving electrons, muons, missing Et, photons, jets,b-tags, and the like. All are fit with SM processes, and compared toexpectations.

If on the other hand one looks for individual events, one canindeed find something weird-looking from time to time, but withbillion-event size datasets this is a very dangerous thing to do froman experimental standpoint. We understand our data only from astatistical standpoint, while nobody on earth can say with certaintyif an electron candidate is a true electron of calorimeter noise or apizero traveling close to a pi-plus or what. I am afraid, in otherwords, that what you propose is a way to do science that we cannot doany longer in present day experiments. It is meaningful in neutrinoscattering experiments, on the other hand.

As I said, this can be done but I would bet it is very hard toconvince an experimenter to part with his most powerful weapon, thatis Monte Carlo simulations and comparisons to it. If one does whatyou propose on Monte Carlo, one will likely find very unexpectedthings too... Even if the simulated process is qcd dijet production.I say this out of experience!

I agree with you, but I think the alternative is not what youpropose, rather it is a signature-based search.