Burkland Polster, in his article in The Mathematical Intelligencer 21 (1999) 38-43, shows the Fano plane from a stereo 3-dimensional point of view

with cyclic symmetry group of order 7.

As Burkland Polster points out, the order of total symmetry group of the Fano plane PSL(2,7) is then seen to be the product of the orders of those two figures, 24 x 7 = 168.

The Geometry of the Fano Plane configuration also gives the Golden Ratio, as described on this image

from a Bruce A. Rawles web page. The Golden Ratio comes from sqrt(5) which in turn comes from the fact that AC = FC is 4 times CD so that by Pythagorean theorem AD is sqrt(15) times CD and
sqrt(15) factors into sqrt(3) times sqrt(5) which gives Golden Ratio.
If you also put a circle inscribed in the large triangle 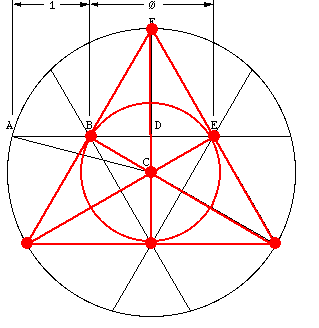 you have 7 points each at an intersection of 3 lines and 7 lines each containing 3 points
which is the Fano configuration 7_3 which is the Fano projective plane which has
the 168-element symmetry of PSL(2,7) = SL(3,2).
The 7 points of the Fano plane represent the 7 imaginary octions and
the 168 symmetries are permutation symmetries that preserve an octonion multiplication table.

According to a web page at home.wlu.edu/~mcraea/finite_geometry/projectivegeometry/prob28configurations/problem28.htm :
"... start with ... the Fano plane (each line has its own color) ...

... and then ... place its 7 points equally spaced along a circle. We then represent the lines as triangles ... 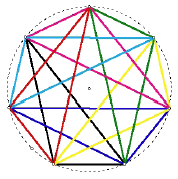 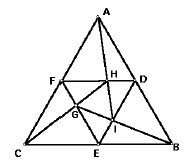 ...[ in which the new points GHI replace FDE as the terminators of lines starting at BCA
and, with FDE at midpoints of the edges of the triangle BCA, the ratio HD / HF is the Golden Ratio.
The three triangles ABC, DEF, and GHI correspond to the Jittterbug Transformation
of triangular faces of the Octahedron, Cuboctahedron, and Icosahedron.
If in the 9_3 ]... we connect two points eactly when they are not connected by a line ...[ we get ]... 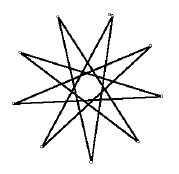 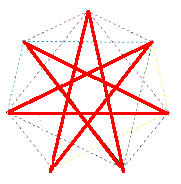 (An E8 lattice is an example of what I call HyperDiamond Lattices, and I use them in constructing a HyperDiamond lattice version of the D4-D5-E6-E7-E8 VoDou Physics model.)

... In dimension 8 there is only *one* even unimodular lattice (up to isometry), namely the wonderful lattice E8! The easiest way to think about this lattice is as follows. Say you are packing spheres in n dimensions in a checkerboard lattice --- in other words, you color the cubes of an n-dimensional checkerboard alternately red and black, and you put spheres centered at the center of every red cube, using the biggest spheres that will fit. There are some little hole left over where you could put smaller spheres if you wanted. And as you go up to higher dimensions, these little holes gets bigger! By the time you get up to dimension 8, there's enough room to put another sphere OF THE SAME SIZE AS THE REST in each hole! If you do that, you get the lattice E8. ...

... In dimension 16 there are only *two* even unimodular lattices. One is E8 + E8. A vector in this is just a pair of vectors in E8. The other is called D16+, which we get the same way as we got E8: we take a checkerboard lattice in 16 dimensions and stick in extra spheres in all the holes. More mathematically, to get E8 or D16+, we take all vectors in R^8 or R^16, respectively, whose coordinates are either *all* integers or *all* half-integers, for which the coordinates add up to an even integer. (A "half-integer" is an integer plus 1/2.) ...

... in dimension 24, there are *24* even unimodular lattices, which were classified by Niemeier. A few of these are obvious, like E8 + E8 + E8 and E8 + D16+, but the coolest one is the "Leech lattice", which is the only one having no vectors of length 2. This is related to a whole WORLD of bizarre and perversely fascinating mathematics, like the "Monster group", the largest sporadic finite simple group --- and also to string theory. ... for now let me just describe how to get the Leech lattice. First of all, let's think about Lorentzian lattices, that is, lattices in Minkowski spacetime instead of Euclidean space. The difference is just that now the dot product is defined by

with the first coordinate representing time. It turns out that the only even unimodular Lorentzian lattices occur in dimensions of the form 8k + 2. There is only *one* in each of those dimensions, and it is very easy to describe: it consists of all vectors whose coordinates are either all integers or all half-integers, and whose coordinates add up to an even number. Note that the dimensions [are] of this form: 2, 10, 18, 26, etc., ... the 10-dimensional even unimodular Lorentzian lattice is pretty neat and has attracted some attention in string theory ... but the 26-dimensional one is even more neat. In particular, thanks to the cannonball trick of Lucas ...

... the number theorist Edouard Lucas in 1875 ... I assume this is the same Lucas who is famous for the Lucas numbers: 1,3,4,7,11,18,..., each one being the sum of the previous two, after starting off with 1 and 3. They are not quite as wonderful as the Fibonacci numbers, but in a study of pine cones it was found that while *most* cones have consecutive Fibonacci numbers of spirals going around clockwise and counterclockwise, a small minority of deviant cones use Lucas numbers instead. ... must have liked playing around with numbers, because in one publication he challenged his readers to prove that: "A square pyramid of cannon balls contains a square number of cannon balls only when it has 24 cannon balls along its base". In other words, the only integer solution of 1^2 + 2^2 + ... + n^2 = m^2, is the solution n = 24, not counting silly solutions like n = 0 and n = 1. It seems the Lucas didn't have a proof of this; the first proof is due to G. N. Watson in 1918, using hyperelliptic functions. ...

... the vector v = (70,0,1,2,3,4,...,24) is "lightlike". In other words, v.v = 0 What this implies is that if we let T be the set of all integer multiples of v, and let S be the set of all vectors x in our lattice with x.v = 0, then T is contained in S, and S/T is a 24-dimensional lattice --- the Leech lattice! ... it means that if we do bosonic string theory in 26 dimensions on R^26 modulo the 26-dimensional even unimodular lattice, we get a theory having lots of symmetries related to those of the Leech lattice. In some sense this is a "maximally symmetric" approach to 26-dimensional bosonic string theory ...".

Richard E. Borcherds, in his paper What is Moonshine?, math.QA/9809110, describes