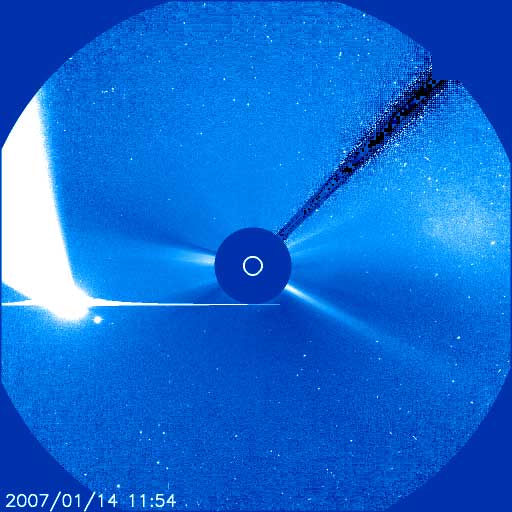 ... the sun is at the center of the image and blocked by an occulting disk, while the comet is located near the lower left of the field with the tail streaming upwards and to the left. The brightness of the comet's head is strongly saturating the pixels of the CCD chip which causes the horizontal spikes. For comparison, Mercury is located just below and to the right of the comet's head. ...".

According to another Cometography web page of Gary W. Kronk: "... R. H. McNaught (Siding Spring Observatory, Australia) discovered this comet ... on 2006 August 7.51 ... calculations have shown a perihelion date of January 12.80 and a perihelion distance of 0.171 AU ... Following its closest approach to the sun, the comet moved into the evening skies of the Southern Hemisphere and developed a spectacular tail that was being compared to comet West during March of 1976. Experienced visual observers were reporting that comet McNaught was between magnitude -2 to -3 on January 17, while the tail was 5 degrees long. The comet finally faded to magnitude 0 by January 22. ... Jim Gifford (Bridgetown, Western Australia, Australia) estimated the naked-eye tail length as 35 degrees on January 23 ...". 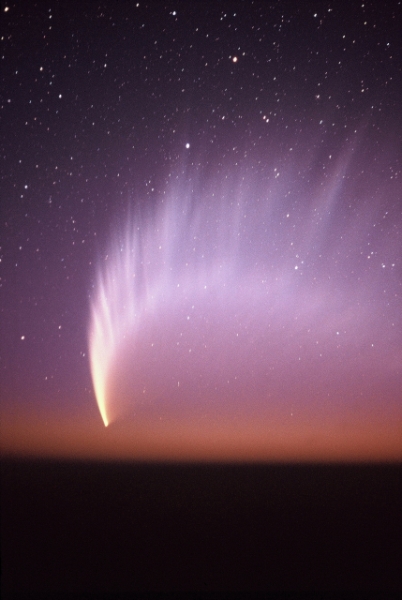 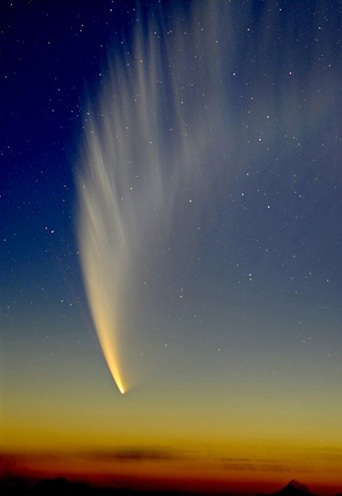 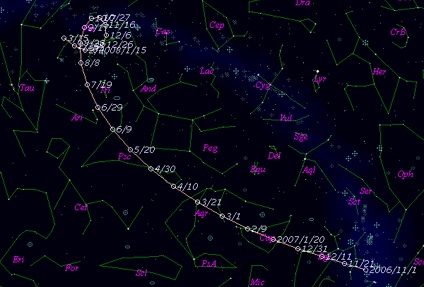 "... Comet 17P/Holmes has experienced a huge outburst, brightening yesterday in the matter of hours from magnitude 16.8 to magnitude 3 and below. That is a jump of brightness of 400,000 times!!

The transformation has been spotted at 13:40UT on October 24th by Seiichi Yoshida [ see path chart above and magnitude chart below, both adapted from Seiichi Yoshida's web page ] in Yokohama, Japan. And the comet has continued to brighten since!  ...". 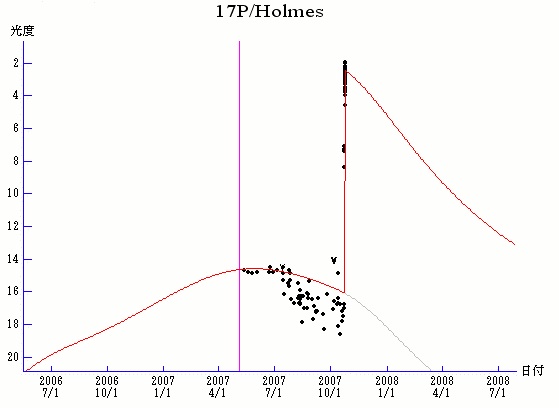 "… Why Comet Holmes has undergone such an explosive outburst is not understood.

This comet is part of Jupiter's "family" of comets - a group in which the far end of their respective orbits (aphelia) cluster around the orbit of Jupiter and takes 6.88 years to make one circuit around the Sun. …

this is probably not the first outburst for Comet Holmes: when it was discovered in 1892, it was likely in outburst mode, since it became as bright as fourth magnitude and was dimly visible to the naked eye …

what this object will do in the coming days and weeks is not known …".

Zdenek Sekanina, in Proceedings of the International Astronomical Union (2006), 2: 211-220, said about comet 73P/Schwassmann/Wachmann in its 2006 appearance:

"… From the behavior of the primary fragment C, 73P is not a dying comet, even though fragment B and others were episodically breaking up into many pieces. Each episode began with the sudden appearance of a starlike nucleus condensation and a rapidly expanding outburst, followed by a development of jets, and a gradual tailward extension of the fading condensation, until the discrete masses embedded in it could be resolved …".

Could this Comet 17P/Holmes episode be "… the sudden appearance of a starlike nucleus condensation and a rapidly expanding outburst …" ? Will it be "… followed by development of jets …" and "… a gradual tailward extension of the fading condensation …" ? ...

Tommaso asks "… how probable it is such a collision …" to cause the outburst of 17P/Holmes.

Since in the 115 years ( roughly 115 / 7 = 16. … orbits of 17P/Holmes ) from 1892 to 2007 the comet has had no outburst, maybe it might be reasonable to guess that it hits something every 16 orbits, and from that (and a guess at its physical cross-section) maybe a density of asteroids could be calculated and that might be compared with what is known about the density of asteroids distributed between Jupiter's orbit ( around 5 AU ) and the comet's perihelion distance (about 2 AU, acccording to Kronk, which is outside the orbit of Mars ( around 1.5 AU) so the orbit of 17P/Homes might be considered to be within the Asteroid Belt ). ...

[ Here is an attempt at such a calculation: Taking Earth's orbit as 400,000 km, and approximating 17P/Holmes's orbit as a circle at 4 AU, the distance travelled by 17P/Holmes in 16 orbits is about 16 x 4 x 400,000 = 25,600,000 km. If 17P/Holmes has diameter about 1 km, then (if pi = 3) the volume swept out by 17P/Holmes in 16 orbits is about 3/4 square km x 25,600,000 km = about 20 million cubic km, so maybe all this indicates that the Asteroid Belt should have one asteroid per 20 million cubic km. Since the cube root of 20 million cubic km is about 270 km, it seems that the rough estimate indicates asteroids big enough to cause such an outburst should be spaced every 300 km or so, which seems pretty dense to me. However, the Asteroid Belt is not a uniform distribution (there are belts of relatively high density), and it is possible that the comet orbit has evolved into some sort of resonant relationship with such belts, and the above rough estimate does not take such possibilities into account. ]

According to an IFA Hawaii web page of Henry Hsieh

"… main-belt comets … the MBCs present a distinct contrast with other periodic comets (the Jupiter-family and Halley-family comets, or JFCs and HFCs) which originate in the cold outer solar system in the Kuiper Belt or Oort Cloud … Unlike the JFCs and HFCs, the MBCs appear to have formed in the much warmer inner solar system … MBC orbits are comparatively much more circular (making solar heating effectively constant) … for the activation of MBCs … We hypothesize … excavating impacts from other asteroids that "dig up" buried (and thus preserved) ice, exposing it to the heat of the Sun …".

According to a Joe Rao article on space.com,

"… Comet Holmes … is part of Jupiter's "family" of comets - a group in which the far end of their respective orbits (aphelia) cluster around the orbit of Jupiter …",

and according to a CIW web page of Scott Sheppard

"… Jupiter Family comets … are believed to originate from the Kuiper Belt … Their orbits are controlled by Jupiter …".

Even though the orbit of 17P/Holmes may not be circular enough for it to be a true Main Belt Comet, since its perihelion is pretty far out (around 2 AU) it may be that it Hsieh's hypothesis for "activation" … "… excavating impacts from other asteroids that "dig up" buried (and thus preserved) ice, exposing it to the heat of the Sun …" might indeed apply to the outburst of 17P/Holmes. ...".

As to "… the sudden appearance of a starlike nucleus condensation and a rapidly expanding outburst … followed by development of jets …" and "… a gradual tailward extension of the fading condensation …",

it looked like ":a starlike nucleus condensation and a rapidly expanding outburst" in a 2007 October 2007 image 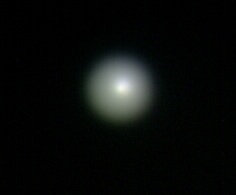 by Eric Allen on a spaceweather.com web page and

a "tailward extension" is seen in the Astronomy Picture of the Day for 2007 November 05 on the antwrp.gsfc.nasa.gov web site that said: "... Comet Holmes continues to be an impressive sight to the unaided eye. The comet has diminished in brightness only slightly, and now clearly appears to have a larger angular extent than stars and planets. Astrophotographers have also noted a distinctly green appearance to the comet's coma over the past week. 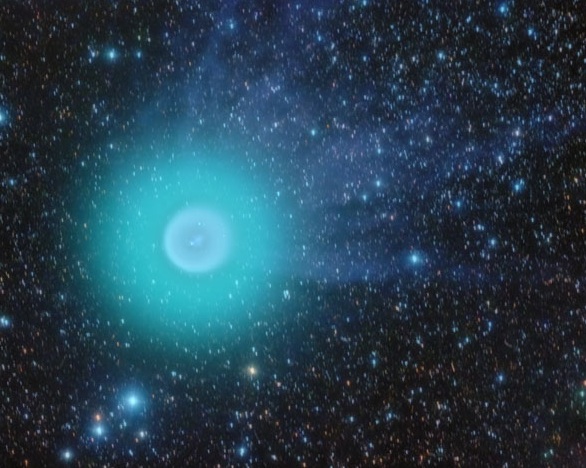 Pictured above [ by Vicent Peris and Jose Luis Lamadrid ] over Spain in three digitally combined exposures, Comet 17P/Holmes now clearly sports a tail. The blue ion tail is created by the solar wind impacting ions in the coma of Comet Holmes and pushing them away from the Sun. Comet Holmes underwent an unexpected and dramatic increase in brightness starting only two weeks ago. The detail visible in Comet Holmes' tail indicates that the explosion of dust and gas that created this dramatic brightness increase is in an ongoing and complex event. ...".